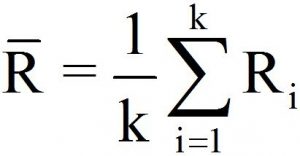 D2 values for the distribution of the average range appear in the following table. 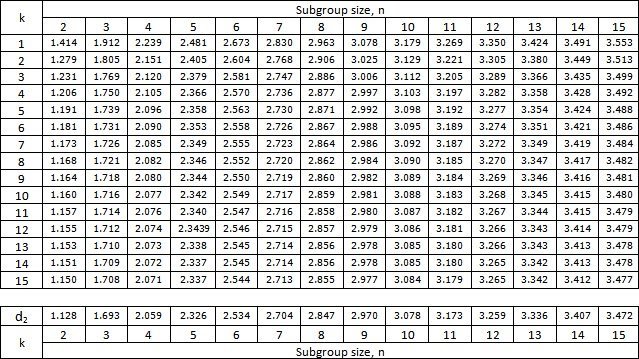 When we use control charts, such as the average and range chart, we often wait to collect k=20 to 30 subgroups. The reason we do so is simple. The value of d2 when k=30 is close to the value of d2 derived from a continuous distribution of subgroups having the same subgroup size. This is why the table of d2 values is published up to k =15.

Control charts use range statistics and d2 values to estimate the standard deviation to compute control limits. The average and range chart is a perfect example. Such a chart is often used to track the behavior of a product feature during production.

How many subgroups do we need to compute control limits?

Once we know the average range we need to look up the correct d2 constant. As an example, suppose we collected k=30 subgroups where each subgroup contains n=5 parts. Also assume that the average range is 10.82. As such, the appropriate d2 value for n=5 is 2.326. Using the expression below we can estimate the standard deviation for a subgroup of parts. This standard deviation is a often referred to as measure of within subgroup variation.

So there you have it. This is how we estimate the within subgroup standard deviation for a collection of parts made under like conditions. In another post, I’ll discuss how we can compute the control limits for the average and range charts using within subgroup variation. If you want to learn more about range statistics then click on the following links.

If you liked this post or have any questions then please let me know by adding your comments below. I look forward to hearing from you. 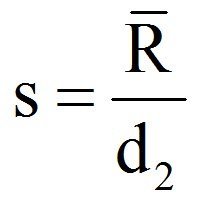