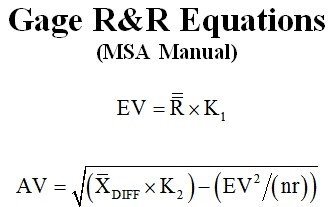 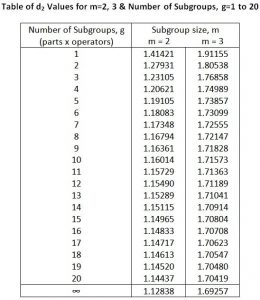 The Columns in the d2 Values Table

The Rows in the d2 Values Table

d2 Values depend on the Subgroup size, m, and Number of Subgroups, g

Since “m” and “g” can change from one Gage RR study to another we must use the correct d2 value based on the combination of “m” and “g” or do we? This fact may not be well known. Often lab personnel will conduct a Gage RR using a standard Excel template developed by their lab manager. Lab personnel may be unaware that their calculations may be suspect if “m” and “g” aren’t chosen with care.

How d2 changes as a function of “m” and “g” is beyond the scope of some ISO auditors I have met. In some cases, auditors have issued minor non-conformances when Gage RR studies use less than ten parts. In these cases, the Gage RR studies used the correct d2 values and the Gage RR calculations were correct. Just because we use fewer parts doesn’t mean our calculation are wrong. This is not a reason to issue a minor non-conformance. In this situation, I would have questioned the fact the parts used did not come from the process we want the gage to track!

Standard practice has been to use d2 values based on an infinite number of subgroups. This forces “g” to become infinite. This means we would need an infinite number of operators measuring an infinite number of parts. Since this is not practical, we need a reasonable cut-off. In the table below we see that a value of “g” greater than 15 causes d2 to change little. For example, when m=2 and g=15 then d2=1.148. Comparing this to m=2 and g=infinite then d2=1.128. As illustrated, the difference between these two values of d2 is 1.77%. Such a small change I believe will not impact any conclusion you may draw.

In typical GR&R studies, there are 2 or 3 operators; 1 from each shift of operation. As such, how many parts would you need to achieve a value of “g” that is greater than 15? For the case of two operators, we would need eight parts.

Let’s consider the following case. Assume we have 3 operators. How many parts would we need to have 15 subgrougs? The answer is 6 parts. For this case, and assuming 2 replicate measurements per part, d2=1.146.

For the case of 3 operators, 5 parts and 2 replicate measurements per part, d2=1.150. As observed, the difference between 5 or 6 parts equates to a d2 difference of 0.004. This change is insignificant and will not impact the “K” estimates used to compute our Gage R&R estimates.

Let’s consider this situation. We have two operators measuring five parts twice. In this case g=10 and m=2, this scenario yields a d2=1.160. Again, the observed difference is insignificant.

By now you may be thinking, “I don’t need to measure that many parts to conduct a Gage R&R study!”  This truth is more is often better. The d2 values do not change a lot as the number of parts decreases – which is good news. But, as the number of parts decrease our ability to estimate the true variation in our process decreases. Also, our ability to estimate difference in Gage Repeatability by operator decreases. Recall in a previous post I showed how we can perform an F-test of the Average Range. To test if an F-value of the average range is significant we must compared this to a critical F-value. Critical F-values depend on degrees of freedom. The more degrees of freedom the more we can detect differences in the average range by operator. And degrees of freedom depend on the number of subgroups “g” and the number of replicate values “r” per groups. So, the more parts and replicate measurements we have, the more sensitive our F-test of the average range becomes.

Summing it all up

In conclusion, when the number of parts decreases the d2 values don’t change a whole lot. But if you thought this fact gives you the go ahead to reduce the number of parts used in a Gage RR study it doesn’t. It just means that your GR&R calculations will not be in significant error since d2 doesn’t change much.

How to Calculate Gage Repeatability using the Average Range

Range Statistics and d2 Constant – How to Calculate Standard Deviation

Now it’s your turn to ask questions and leave positive comments about this article. I spend a lot of time sharing my knowledge with you and all I ask is that you let me know what’s on your mind. 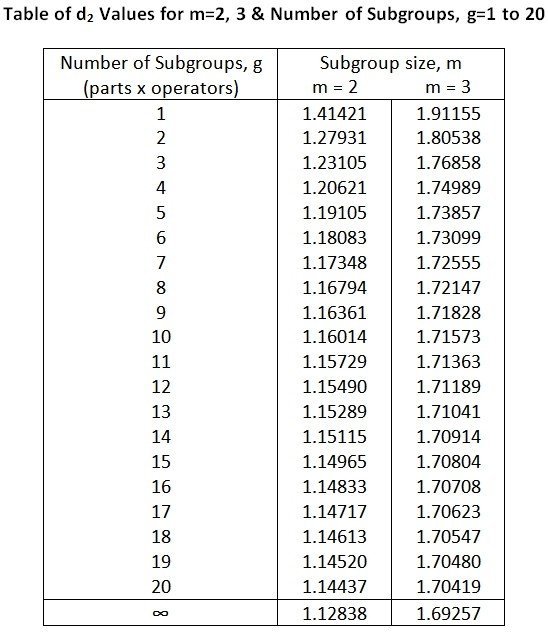