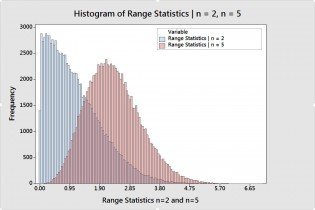 Range Statistics for n=2 and n=5

Range Statistics for the Average and Range Charts

When using an average and range chart a typical sample size is n=5 consecutive sample specimens and we call this a subgroup. Each sample specimen, in a subgroup, should be produced under homogeneous or like conditions. When produced under like conditions we say the samples specimens came from a system of common causes. The time between subgroups should be constant, if possible. In case of a special cause event, more subgroups may be needed to confirm the event is real.

Range Statistics for the Individuals and Moving Range Charts

How Do We Calculate the Standard Deviation From these Two Range Statistics?

To calculate the standard deviation for these two range statistics we use the following expressions. The first is for the average and range charts and the second is for the individual and moving range charts.

Range Statistics and the d2 Constant

Where did the d2 constant come from? They’re found in statistical process control tables. But how were they derived? It’s better explained by numerical example and it’s something that you can also figure out on your own using Excel or Minitab. 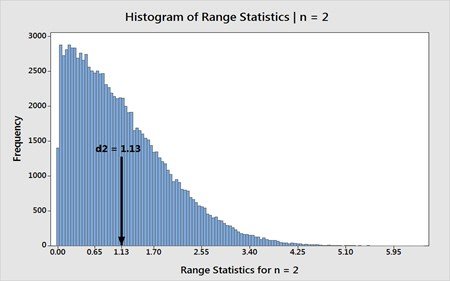 Histogram of Range Statistics for n=2 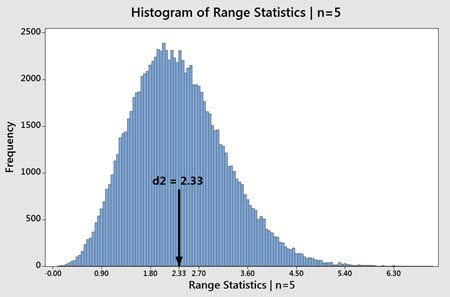 Histogram of Range Statistics for n=5

When I compute the average for the histogram of range statistics for n=5 we get d2=2.33. Notice this value is the same value reported in any statistical process control table. Note the d2 constant is reported to two decimal places.

Things to keep in Mind about Range Statistics

Notice that I used normally distributed values to compute the range statistics in Minitab. Also notice the shape of the distribution becomes normally distributed as the sample size increases from n=2 to n=5. This is one reason why n=5 is a common subgroup sample size. Also notice we used histograms to model an infinite curve. If we knew the probability distribution function for n=2 and n=5 we could precisely compute the d2 constants using calculus. That I will leave for another post.

So there you have it. If you ever wondered where these d2 values came from – well now you know! Now I need you to let me know if you appreciate this post by leaving your comments below. I look forward to hearing from you.

If you are interested is seeing how you can visualize and estimate the d2 and d3 constants then watch the video below!

If you enjoyed this blog post, then consider reading these interesting Articles!