WHY ARE ENGINEERS INTERESTED IN TESTING FOR NORMALITY USING EXCEL?

First of all, Excel is everywhere and not everyone has a statistical package available to them. So, testing for normality using Excel is an easy way to go. Excel is hold the kind of data the Engineers work with on a daily basis. For example, Engineers are often interested in knowing how a specific feature of a product conforms to a desired specification. So, they will sample a specific number of units, measure a feature of interest, and apply statistical procedures to that data to compute a non-conformance rate.

WHAT IS A NON-CONFORMANCE RATE?

A non-conformance rate is often reported in parts-per-million (PPM). This rate, is a calculation that computes the number of units that fall outside the specification limits assuming the data follows a Normal Distribution. Such data should be free of intermittent shifts meaning it is identically distributed. This is often evaluated by a visual inspection of a histogram to see the data is bell-shaped with a single peak. Last, the data should be free of autocorrelation – meaning it is independently distributed. We can plot the data, in the order collected, and look for trends up or down. Once we check these assumptions, we can be confident the data is random and follows a fixed normal distribution having a constant mean and standard deviation. Under these conditions we can estimate our PPM non-conformance rate.

In this post, I’ll discuss a statistical procedure called the Anderson-Darling test for Normality. I will show how this procedure is used for testing normality using Excel. In another post, I’ll show a Runs Test procedure for Detecting Non-Randomness. Together these procedures help test the assumptions for a distribution of interest.

The null and alternative hypotheses are statements that the data are normally versus non-normally distributed.

In Table 1, shown is a data set of 50 observations. We will use this data to show the Anderson Darling step-by-step calculations for testing normality using Excel. 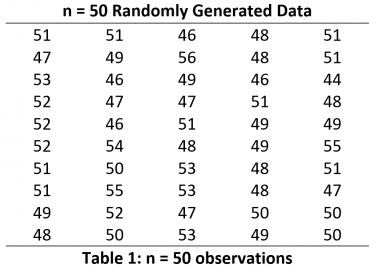 First, we compute the value, Si, for each observation using the expression below.

Once we compute Si for each observation we then sum all Si values from 1 to n as shown in the expression below.

Once we compute, S, we can calculate the Anderson-Darling Statistic, A, using the expression below.

I will illustrate the step by step calculations for testing normality in Excel shown in Figure 1.

Label cell A1 as shown in Figure 2 and enter/copy the data in cells A2 through A51. 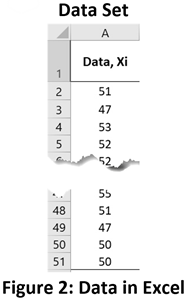 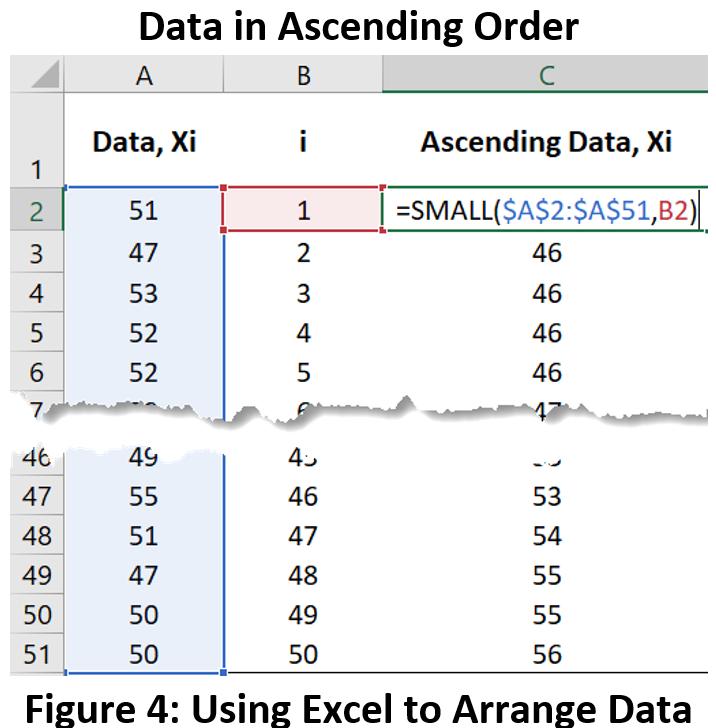 In Figure 5 and in cells D1, D2, and D3 type the labels Average, StDev, and n. Next, in cells E1 and E2 use the following excel formulas for the Average and Standard deviation. For the average use: =average(A2:A52). For the standard deviation use: =stdev(A2:A52). Then, in cell E3 enter the value 50 for the sample size n.

In column F, we need to perform the calculation shown in Figure 7 below. In cell F2, enter the following formula: =2*B2-1, and drag this cell calculation to cell F51.

As shown in Figure 8, enter this formula into cell G2: =LN(NORM.DIST(C2,$E$1,$E$52,TRUE). This cell contains two Excel formulas. Nested in the natural log (LN) is the NORM.DIST formula. Please note, the normal distribution function has the following form, NORM.DIST(x, mean, standard_dev, cumulative). In this expression x=C2, mean=E1, standard_dev = E2, TRUE = cumulative. In cell G2, we are computing the cumulative area under the normal curve, as a probability from 0 to 1 at Xi = 44. To compute the cumulative area at Xi =44, we use the sample average (49.82) and standard deviation (2.639) as substitutes for the normal distribution parameters (µ and σ). Once we have the area under the normal curve, we then compute the natural log. Don’t forget to place $ sign about the cells E1 and E2 and then copy the contents of cell G2 through to G51.

In column H, reorder the data in descending order. To do so use this excel formula, =LARGE(array,k). Type the following formula in cell H2:=LARGE($A$2:$A$51,B2). This formula selects the data in cells A2 through A51 and returns the first largest value. Remember to place the $ signs about A2 and A51 before you copy the contents of this cell through to cell H51.

Enter the following formula in cell I2: =LN(1-NORM.DIST(H2,$E$1,$E$2,TRUE)) as shown in Figure 10. This cell contains two Excel formulas. Nested within the Natural Log (LN) is NORM.DIST, the Normal Distribution function. Please note, this function has the following form, NORM.DIST(x, mean, standard_dev, cumulative). In this expression: x=H2, mean=E1, standard_dev = E2, TRUE = cumulative. We are computing the cumulative area under the normal curve, as a probability from 0 to 1, in reverse order. Here, we are computing the cumulative probability at Xi = 56 using the sample average (49.82) and standard deviation (2.639) as substitutes for the normal distribution parameters (µ and σ). Once we have the cumulative area under the normal curve, we then subtract this from 1 and compute the natural log. Don’t forget to place $ signs about the cells E1 and E2 and then copy the contents of cell I2 through to I51.

At this point we need to pause and take the time to understand what the Anderson-Darling procedure is trying to do. Such an explanation will make our effort testing for normality using Excel meaningful.

Recall, in Figure 10 – column H, we computed the cumulative probability in ascending order. We then computed the cumulative probability in descending order and subtracted this value from 1 in each cell. Because the normal distribution is symmetrical, we expect the probability at i=1 and i=50 to be the same. This is also true for the cumulative probability at i=2 and i=49 and so on. Assuming the data is perfectly normal, the difference in probabilities at i=1 and i=50 would be zero. This is also true for i=2 and i=49. Summing these differences from i=1 to n=50 would result in a value of zero – meaning the data must be normally distributed. Any value other then zero we compare to a critical value associated to a specific risk. If that value exceeds a critical value, we would say the data is not normally distributed at a specific level of confidence. 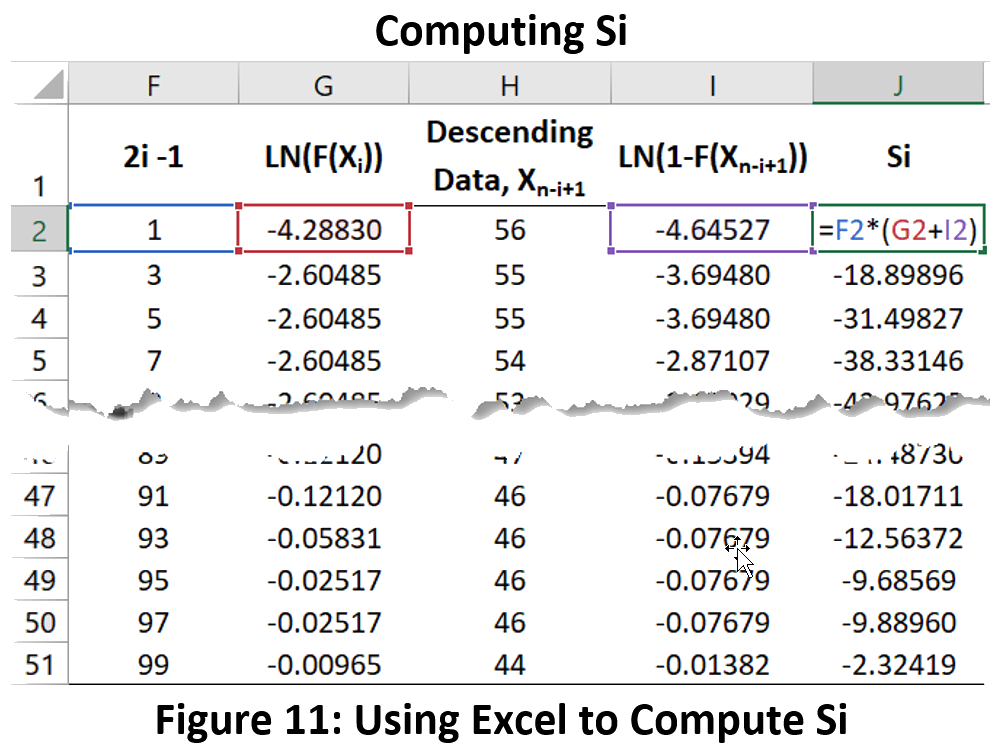 We are almost done testing for normality in Excel! In cell J52, as shown in Figure 12, we need to sum the values in column J between cells J2 and J51. To do so, enter the following formula in cell J52: =SUM(J2:J51). As a result, we have now computed the value of S using the expression below. 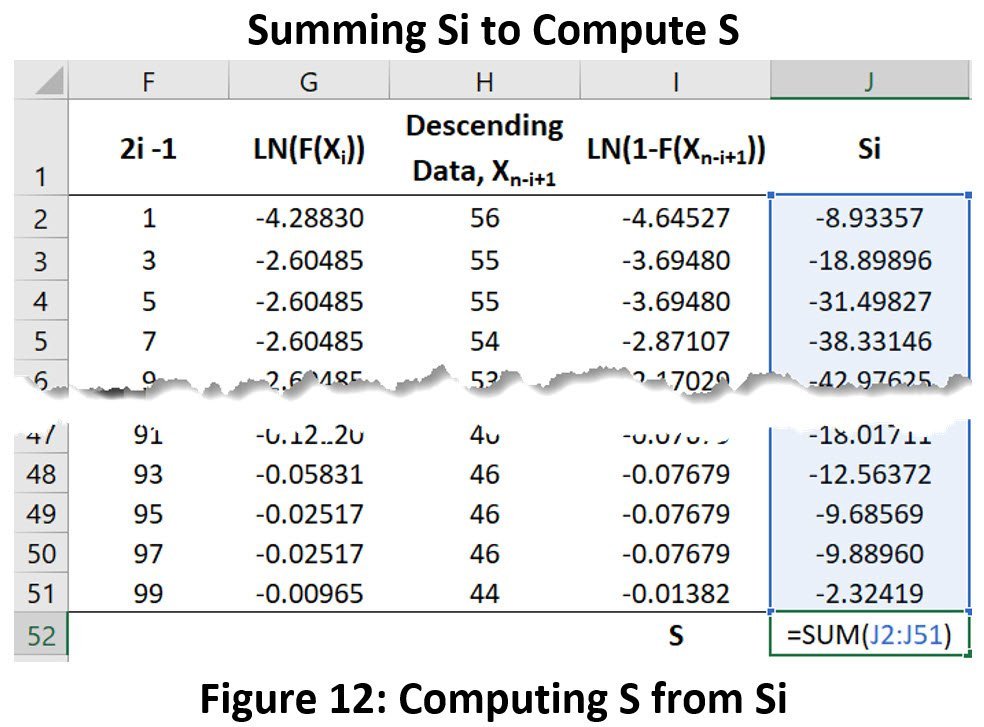 Once we compute, S, we can calculate the Anderson-Darling Statistic, A. This is shown in Figure 13 using the expression A=-n-(S/n). This is the value in cell J53. Enter the following formula into cell J53: =-E3-1/E3*J52. 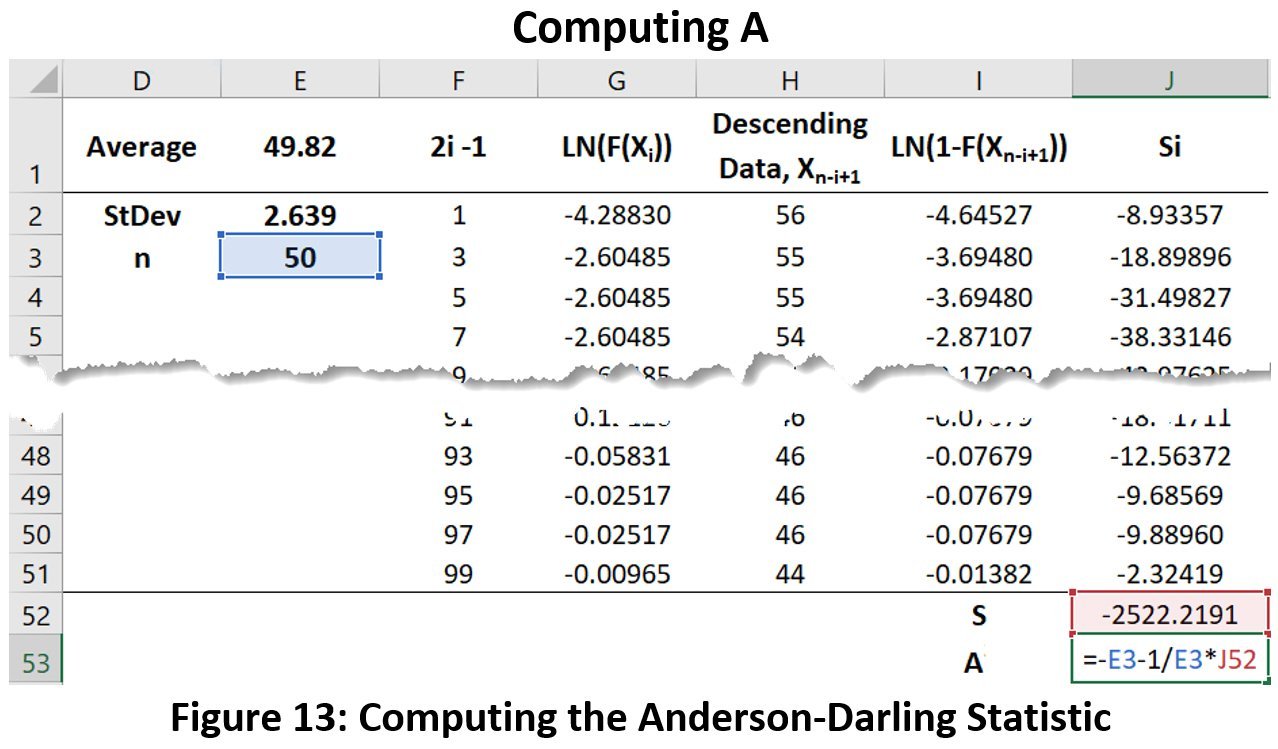 Once we compute, S, we can calculate the Anderson-Darling Statistic, A, using the expression below.

When the population mean (µ) and standard deviation (σ) are unknown, but estimated using the sample mean (

) we must compute an Adjusted Anderson-Darling statistic, A*. I show the expression for the adjusted value below.

THE CRITICAL VALUE FOR THE ADJUSTED ANDERSON-DARLING TEST STATISTIC

A statistical difference exists when the sample data and the theoretical distribution provided by A is equal to or exceeds the critical value (A*≥ critical). So, let’s compute a critical value, for a normal distribution. We will do so for a given risk (α). using the expression below.

THE CRITICAL P-VALUE FOR THE ADJUSTED ANDERSON-DARLING TEST STATISTIC

In trust you found this Anderson Darling procedure for testing normality in Excel useful. Since many statistical procedures rely on distributional assumptions, knowing how to test for normality is critical. So, testing for normality using Excel we can check if a sample set of data and know if it came from a population with a specific distribution. In our case, we applied the Anderson-Darling procedure to compute a statistic and a critical value. We also estimated a p-value for our Anderson Darling test statistic. We then used this to determine if sample data came from a Normal population.